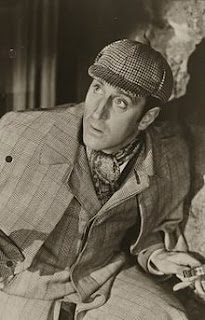 Actor Basil Rathbone died July 21, 1967 at the age of 75. He appeared in more than 70 films.
He portrayed Sherlock Holmes in fourteen Hollywood films made between 1939 and 1946.
On this special podcast we have a 1945 Golden Age of Radio production starring
Basil Rathbone as Sherlock Holmes and Nigel Bruce as Dr. Watson.